Skip to content
The Girl Who Moved In Next Door

The Girl Who Moved In Next Door: Moderately Condensed Version

We met in the spring of 2002. I had moved to Tampa two years prior to start college. She and her sister were visiting her father for a few months on tourist visas. At the time her father and I, along with my roommates, shared a wall which divided the two town-homes we lived in. We didn’t know much of each other. Only that we spoke different languages, and respected each other’s space.

One day my roommate and a friend were talking about the girl who moved in next door. They asked if I had seen her and more specifically, how “steamy” she was. I hadn’t seen her yet. Only her sister who I thought was surely too young to be considered “steamy.” I said as much to my friends. They went on to clarify that there was another older girl.

So, I kept an eye out over the next few days and indeed saw both girls. Very cute I thought but surely still too young. The older girl had very straight, sandy brown hair to the mid back and a small frame, likely a whole head shorter than I. She wore very well cut jeans that showed she was fit but, like a said, too young to be steamy. I was already 22 then so even if she were 18 that seemed a bit young for me. When I told my friends my findings they disagreed. They were convinced she was older. In fact they had spoke to our neighbor who shared the opposite dividing wall of the bigger corner unit connected to ours. He was older than us by just over 10 years and had a young son who lived with him.

The story was the son went to daycare or kindergarten or whatever little kids do. Since the father was still working when the boy finished, he had arranged for this steamy neighbor to pick his son up and babysit until he got home. This of course required driving with his son so surely he would have seen her drivers license and could confirm her age. My friends went on to say they got word from the boy that she was in her twenties. I still found it hard to believe but had to admit the story seemed plausible. I found myself thinking the term steamy felt more applicable now knowing she may be twenty. I decided to find out. Time to go to the source. I caught up with my neighbor one evening to get details. He confirmed the story my friends had told me.

So you saw her license? I asked.
Yeah, he replied.
So how old is she?
She’s twenty five.

I thought. This didn’t seem a big deal to him but it certainly was to me. Here I thought this girl could barely be 18 and now your telling me she’s twenty five! This changed everything. She just went from cute but too young to steamy and game on in the span of three words!

Wow, I replied. I never would have thought.
Yeah me either, he said. I’ve been working up to ask her on a date but I’m not sure how the father will take it.

I thought. My neighbor was gonna ask her out! The older guy!? The one with the kid!?

Just then, we heard a door open behind us. We had been standing in my driveway facing the street. We both turned to see that sure enough, it was her. I think we both got a bit nervous. Were we talking too loud?

Did she hear us? She was carrying a few books and walked right up to us. She said hi and apologized for interrupting. All in the most adorable Latin accent. She went on to tell my neighbor she appreciated his offer but had to refuse as she handed him his dictionaries. She went on to tell him she couldn’t except the flowers either and would go get them.

He gave her flowers!? I thought.

He had conveniently left that part out of our discussion. Embarrassed he quickly said that wasn’t necessary and insisted she keep the flowers as it was his way of welcoming her to the country. She accepted politely, smiled and turned to me.

I’m Monica, she said, and rigidly stuck out her tiny hand.

My hand met hers and she gave me a very firm handshake for such a small women.

Un poco, my roommates are Latin so I’ve learned some things.

She smiled. What else do you know, she asked.

She burst into laughter.

My neighbor chuckled nervously and asked, What did you say?

I repeated in English, You have a booger on your face.

He became flush and quickly wiped his face. I was joking of course but that was enough embarrassment for him and suddenly it was urgent he get those books back to his house. Once alone I asked if she really thought Tampa was boring.

Yes, she replied. The city I’m from is a much bigger with a lot more to do.

Well why don’t you let me take you out? I asked. The spring fashion show is coming up at my school. We can get dinner, do the fashion show and maybe go out for a drink after. I’ll show you around.

She considered the offer for a moment, smiled and said, Listo!

We went to the fashion show and several dates after that. Shortly we found ourselves in love. Which was a bit confusing being that she was there temporarily. But love doesn’t care about those things so, off we went. I ended up having some issues with my roommates and decided they should move out. This was about the same time she was having trouble with her father. So of course, she moved in with me. We had a wonderful time just being in love over the next few months. But ultimately the time came when the visa would expire. We decided she should extend it so we could figure things out.

Well, the extension of course went much quicker than expected. We tried to extend it once more but were denied. She had to go back.

We agreed to keep in touch and see how it goes. Over the next 6 months we communicated through email and I collected a wealth of used phone cards. This being before Skype and FaceTime. She tried several times to get another visa. Each time she filed it took a month for an answer. After being rejected three times it was obvious she would not get one. We finally decided that we wanted to see this out and the only way to do so was… to get married.

I spent the next year filling papers so I could legally go to Colombia to marry her. Once I had all my papers in order, I exited college for a quarter, and planned my trip. Crazy, I know. Here I was, just turned twenty four, working part time, not even out of college, and am about to fly to a country I have never been, where I don’t speak the language, to marry a girl I hardly know.

But again, love doesn’t care about those things. So I went. I met her family. We got married. We had a honeymoon. It was lovely. Being in those new places, seeing this beautiful girl again, getting to touch her, smell her, hold her. 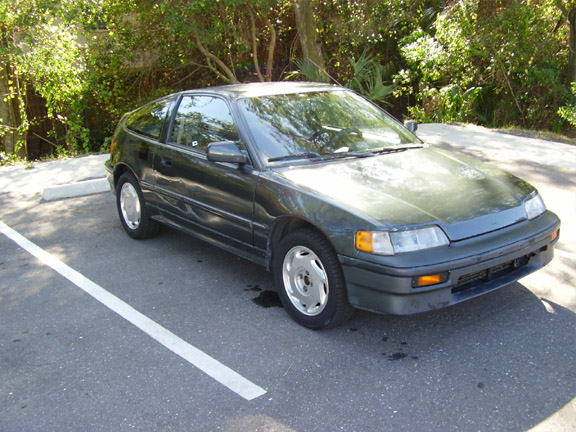 A year and a half of emails, limited phone calls, filing papers, waiting, hoping. And 10 days later, I was on a plane back to the states. You see, there were two ways to file the paperwork. One took longer but she could come back with me. The other, was less time to get there but she had to wait for all the papers to be filed stateside before she could return.

So we waited. Another year passed. Finally we got the papers. She flew into Miami airport and was expected to arrive very early in the morning. After she would hop on a shared van that would bring her to Tampa. But, as luck would have it, she arrived several hours early. Around midnight. Which meant that she would have to sit at the airport, alone until the van left at 7am. Unless of course I drove the 4 hours to pick her up myself.

Which is what I did. In my 1992 Honda CRX Si. With who knows how many miles on it because the tachometer had broke some time ago. This was not the best vehicle for a 9 hour round trip with a fair amount of luggage in it. We actually broke down in the middle of gator ally. Only briefly. I think the engine flooded somehow. I pulled over and realized there was no moon. It was very, very dark. But as you might expect from a Honda I waited, turned the engine over and ta dah, we were on our way.

We made it back to our new apartment and got some sleep. Over the next few weeks we re-acclimated ourselves to each other. It was odd at first. I had been living alone for the past two years and was quite used to not having anyone in my personal space. She on the other hand had gotten comfortable in her country again and found it very difficult to leave her family and friends.

But after some time we began to feel good again. In a few years we all but forgot how awful it was to have been separated for so long. I finished college and got a job at a local ad agency. She got a job at a bank. We moved around Tampa a few times until we found a newly built townhouse we liked. We bought it and a few years later got our first Boston Terrier named Juan Perro. A few years after we got a little girl Boston, Maria Perra, to keep Juan company.

Just after that Monica got her citizenship papers. Signed by president Obama himself. 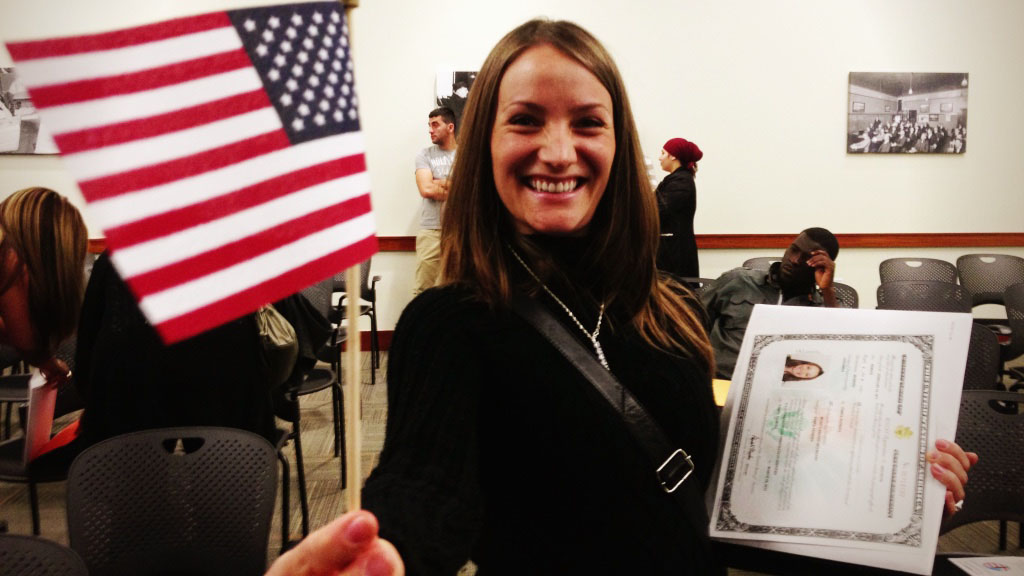 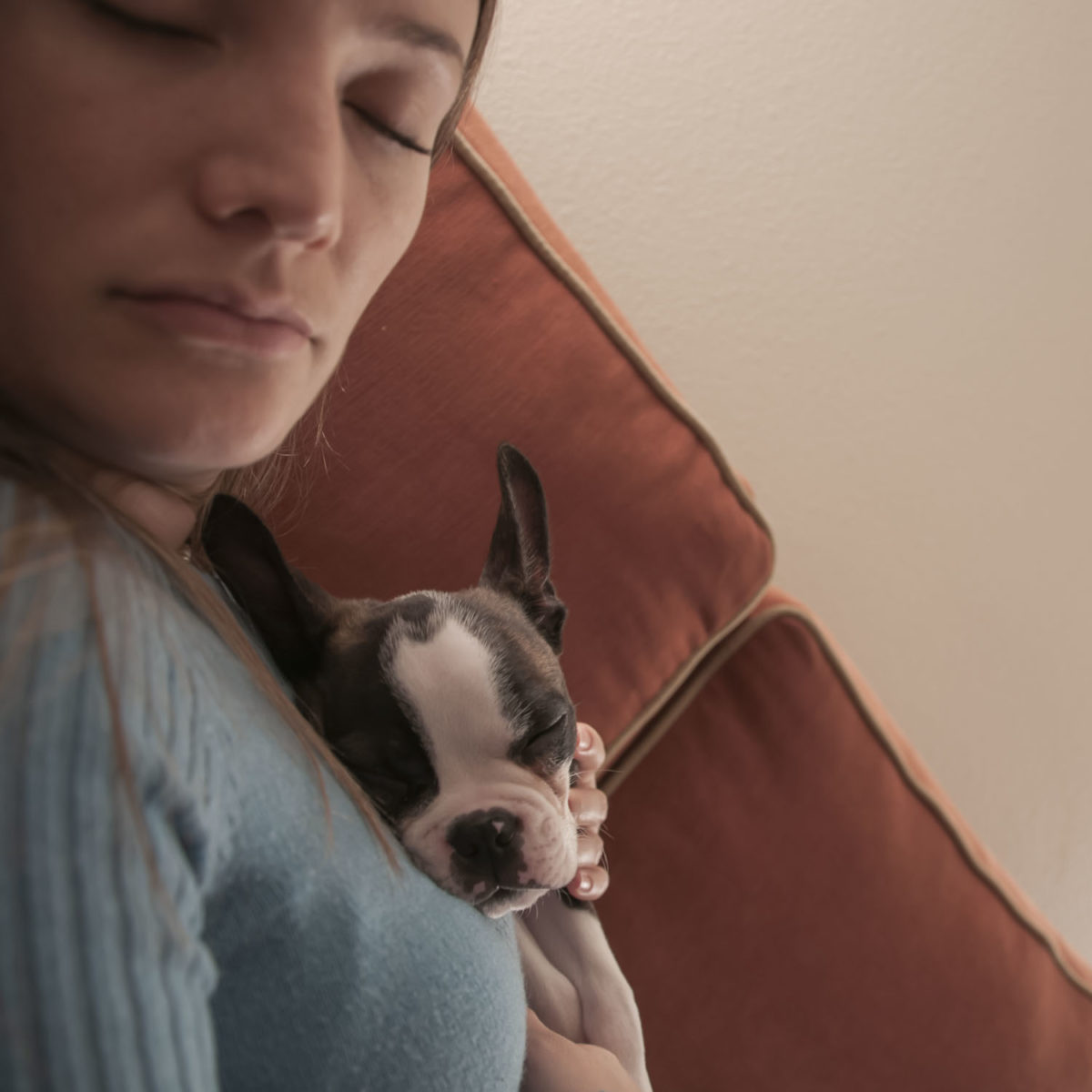 I left the agency and am a freelance photographer now. Monica still works for the bank and the four of us cuddle together every night in our little townhome. Felices Los cuatro, as Moni would say. We’ll celebrate our 15th anniversary today.

about the time she was

the girl who moved in next door.